UX Scotland is a hands-on, practical User Experience and Design conference for the software, web, and mobile community, held every year in Edinburgh.

I attended it for one day last year, making some lasting connections with my peers, and attending some fantastic talks & workshops.

So I made sure to attend the full three day UX Scotland conference this year (its 7th year) – and I wasn’t disappointed! It was held once again in the amazing venue that is Dynamic Earth .

I thought I'd collate my thoughts & experiences from this year's UX Scotland event. I'll try to keep them as brief as possible! Unfortunately there was only one of me, so I couldn’t be present at all the talks and workshops, given that there were often five different talks happening at the same time. I’ll pick out a few that really resonated with me at UX Scotland. 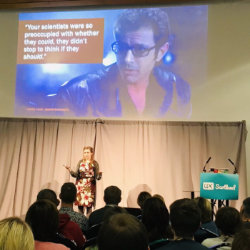 An insightful talk by Cheryl to illustrate the danger of unchecked optimism. She pressed on the need to balance optimism and pessimism by adopting ‘opti-pessimism’ into your process.  She boiled it down to these four rules:

She framed this around an amusing story about nearly being trampled by an elephant in the savannah(!!), by being more prepared for unforeseen circumstances.

What I take from this is that designing friction can be a good thing. Friction is anything that prevents users from accomplishing their goals or getting things done. But done correctly, friction can actually improve the user experience. Look at the example of Amazon’s Alexa. Their initial ordering process was completely frictionless, in order to make it as easy as possible. So this meant that ordering often happened by mistake without confirmation. You could say “Alexa, order me a dolls house” and it would order straight away without even confirming which one you wanted.

Will challenged the way that the UK government tells us we should think about user needs. He kicked it off by talking about how he goes about training user researchers and leading user research teams. He thinks that people get too hung up on user needs. These encompass many facets, but often these user needs get the life squashed out of them by being crammed into user stories.

Instead of capturing these needs in stories, discuss the research with the developers & designers, and stop making recommendations. This can constrain designers. He also impressed upon us to research stuff that matters. He went on to say that “user research is about reducing risk”. It’s a process to find the riskiest assumptions.

His three ‘research heresies’ are:

From my own experience it’s a little different. I often take part in both user research and the UI design. Will acknowledged some of his points may not apply to people in a similar position to me. What I can testify to though is that you don’t need to research every single thing, particularly if you are on a tight budget or time is not on your side. Sometimes a heuristic evaluation is suitable, particularly if you are following pre-defined guidelines, such as the UK’s Government Digital Service (GDS) or United States Digital Service (USDS). These are backed up by hours and hours of user research and usability testing.

I just want to be believed

Sam (Senior User Researcher) delivered a very sobering case study on how they redesigned the UK government service ‘Criminal Injuries Compensation Authority (CICA)’. The CICA deal with compensation claims from people who have been physically or mentally injured because they were the victim of a violent crime in England, Scotland or Wales.

Sam used an example of the service for those who have suffered sexual abuse, or are the victims of rape. There were obviously challenges along the way. What stood out for me were:

I have been interested in how to conduct user research with groups that are either unwilling to take part, or with whom it is unethical to directly interact. This was a perfect example.

From design to large-scale execution: reshaping a territory

This talk took me a little by surprise, as I have only experienced UX in the digital landscape. This was about how a Parisian design company was approached by the French tourist board to revitalise a ski resort in the Alps. They applied UX principles to improve customer satisfaction & increase footfall. A completely different perspective from my usual experiences!

Instead of working with developers to build a digital application or website, they worked with a core team of graphic designers, and worked closely with lighting engineers, sign makers, and the police(!), amongst others. They took ethnography & rapid prototyping to a whole new level and actually lived on-site for a week every month! Not sure if my family would let me get away with that…

I particularly liked their philosophy – the UX practitioners always worked in teams of two. They testify that the results weren’t just twice as good, but 3 to 4 times better. Nice if you have that luxury! 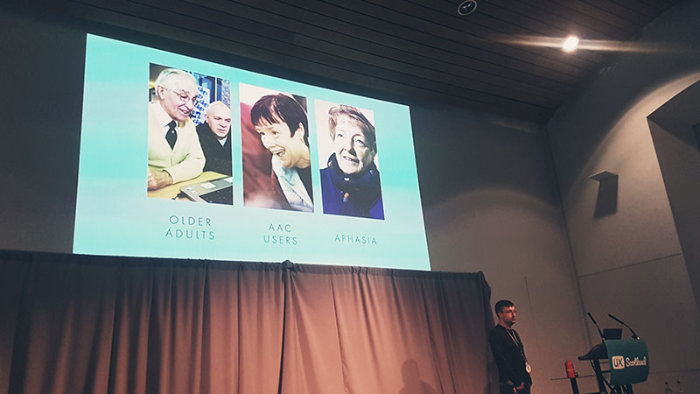 I know Mike from last year’s UX Scotland conference, and am very aware of the wonderful work he does at Dundee University embracing usability, inclusivity & accessibility.

Mike and Rachel told us about the history of The User Centre. It’s been running since 2005. It helps to educate those with low digital skills, or those that struggle to engage in the digital world. It also provides important steps forward in understanding needs from users of all walks of life.

The members/volunteers are categorised into three distinct groups. Elderly users, AAC users (non-verbal), and those with Aphasia (language impairments, typically following strokes etc). This creates value not only for users, but for researchers, teaching, and the university as well.

The underlying principles of The User Centre are:

Really encouraged to see all the fantastic work being done in this field. Mike’s invited me up to Dundee to see what they’re doing close-up. An opportunity I will definitely not pass up!

Put on your own oxygen mask before helping others

Anne Dhir (We Are Snook Ltd)

This talk was not really about UX, but more about mental health. Anne started off with some sobering statistics:

She was making the point that you must look after your own mental health before looking after others. She also gave some tips on how to look out for your colleagues. She said “As a team, we need to work with a balanced amount of engagement and detachment so that we can look after ourselves and each other”.

We should all be aware of the support available to us.

Writing and designing for kids

I loved this joyful & enthusiastic talk from Elaina at UX Scotland. She told us about how they developed Messenger for Kids (which is still to be released in the UK). It was a fascinating insight into participatory design, where they performed research, design & testing with both parents and children. This gave an enormous amount of creative power to the kids! 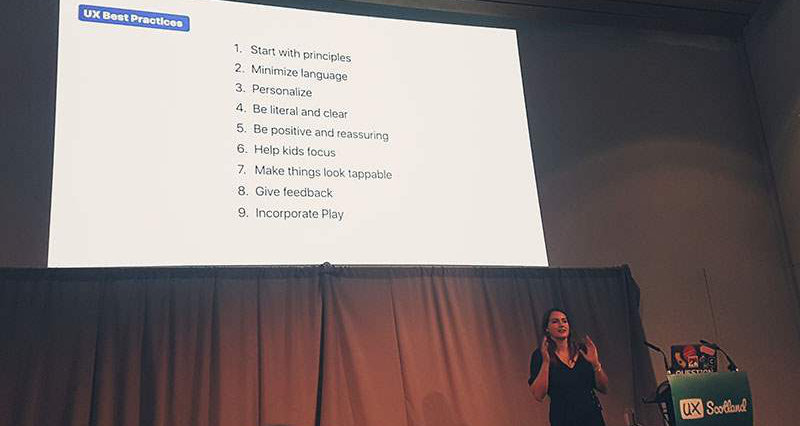 Most apps fall into these three categories:

But they are mostly designed for teens and adults, which is surprising, as under 13s comprise of approximately 25% of the population (I will assume she was talking about her native US). So they immediately had to learn a different language – as adults generally have a more difficult time NOT reading, whilst kids were the opposite – their ‘language’ is very visual.

I'm excited to see its launch in the UK and what my kids make of it!

This was my first ever Lean Coffee session, and I was pleased it was UX Scotland. It’s a really interesting format. There’s a main topic, which in this case was UX recruitment. Everyone has a voice in deciding the agenda, which is a great way to share the responsibility and reflect the desires of the group.

We need to talk about Frank: designing for the wild child of government

This was a case study in how they redesigned the ‘Talk to Frank ’ service, an honest and informative advice service generally aimed at teenagers about illegal drugs and other pharmaceuticals. 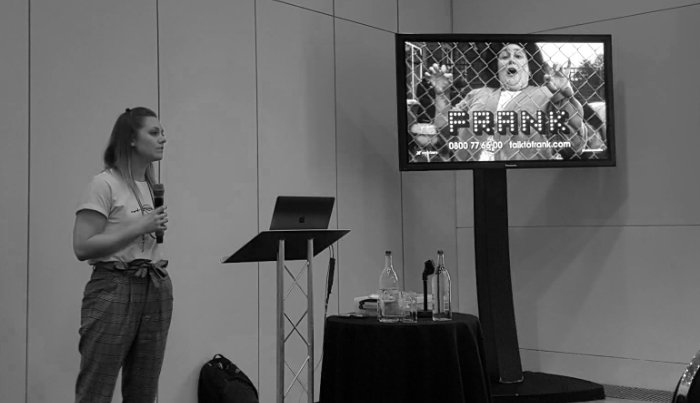 cxpartners had a basic design principle “Be Inclusive”. It was a fascinating insight into how they conducted their research, designed the service through many iterations, and the feedback they received afterwards. Again it was an area where it was difficult and unethical to approach drug user directly.

Emma emphasised that research is a team sport. One of the striking quotes was from a developer who was encouraged to participate in guerrilla testing, and saying “seeing someone struggle with something you’ve built was heart-breaking”.

I was really encouraged by the idea of the whole team being exposed to testing and feedback.

Ends. Why it is critical we balance the bias consumer lifecycle 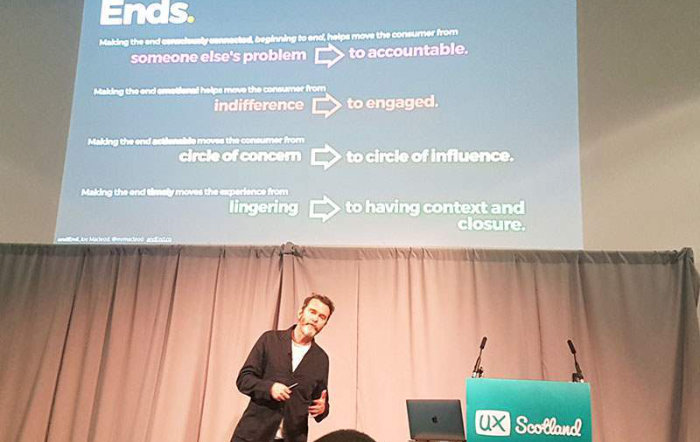 A fitting end to the three day UX Scotland conference with a very thought-provoking and entertaining keynote by Joe MacLeod. Thinking about off-boarding has been very interesting and something not often considered. Big companies don’t like to think of their customers leaving, and experience has shown that in the past they often make it as hard as possible to do so! Quite often it is the case that you deliver a project, and haven’t factored in the off-boarding of a customer, device or even packaging.

Joe went on to talk about the tension between our ‘consumer self’ and our ‘civil self’. Off-boarding is becoming more important these days when you consider GDPR, end of services and products, or even the plastics we are seeing more of in the natural environment.

I will need to add Joe’s book to my UX bookshelf!